Pam Corkery. Does anyone take her seriously?

Pam Corkery. Does anyone take her seriously?

There is part of me that is sort of grateful to Pam Corkery. She gave us the wonderful term “Puffed up little shit”, but I just saw the dear girl again on Paul Henry this morning (23 April). She was climbing out of her pants to get her vitriol across.

What has she ever achieved? 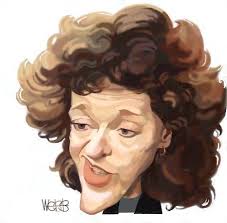 Married three times. Became well known as a radio journalist at Radio Pacific. My personal experience of listening to Pam Corkery was limited. I have a weakness for believing that sarcasm really is the lowest form of wit. So I used to just find another channel. There’s only one thing worse than a dumb talk show caller, and that’s an aggressive, sarcastic, impenetrably arrogant host.

Pammy failed to win the Auckland mayoralty as an independent in 1995. (Mayors need to at least look as if they listen to public opinion and don’t have a deeply entrenched political agenda). Three unremarkable years in parliament as a list MP for the Alliance party 96 – 99. She left, blaming politicians and the parliamentary environment for her next decision: To run back to the place she felt more comfortable – behind a microphone as a talk-back host. There, she could expound about the “world according to Pam Corkery” again. She could be secure in the knowledge she could switch dissenters off. If not with her mouth, then at least with the click of a switch.

Presented TV1’s “The Last Word” starting March 2003, which was cancelled by September 2003. Did some gang related documentaries around 2008, during which the Police felt she had a conflict of interest. 2011, failed to get a resource consent for what was clearly a political stunt in establishing a bordello – a brothel exclusively for female clients. I’m personally impressed with that idea and I wish it had succeeded. It would have been good for Auckland, but Pam Corkery was never going to run it, unless she held the dog collars attached to her male staff.

Need I mention the Internet Party? Let’s just say the party was a joke and a sideshow by anyone’s standards. But Pam Corkery being Laila Harré’s press secretary at least led to the coining of that wonderfully memorable “Puffed up little shit” line.

Why is Pam Corkery so irrelevant?

Pam Corkery is that type that doesn’t listen except through a 6 inch thick layer of politically jaundiced head filters. Most of us, even those who vote based on an ideology, know somewhere in our heads that there is no political or social absolute. While we have constructed in our minds an argument that tends to support something a bit left or right of centre, we are still prepared to see the reasoning and, indeed the merits, of other points of view. Because, unless you are a bigot, (and I believe people like Pammy are, in many ways, terribly blinkered and bigoted), there ARE valid points of view that are applicable for varying situations and moral dilemmas, and they don’t have to follow ideological lines.

On the face of it, one would have to predict that Paul Henry in the same room as Pam Corkery would be asking for trouble. But Paul has a sense of humour and does not do public spats. Pam Corkery has no sense of humour and loves public spats. Paul kept the lid on. He knew he would have lost a lot in the wreckage, whereas Pammy has nothing to lose. She creates wreckage. It would be nice if she knew the difference between promoting ideas and ramming them down your throat with a hot poker, but it’s not her way. It’s her way or the highway.

Actually, she just may know what a sense of humour ought to be. Even though she doesn’t have one. This morning, she remembered to smile two or three times to take the heat off, but it was the smile of a hungry alligator. She takes herself so seriously that she is incapable of lifting the red mist and allowing a light moment, another opinion, another angle, to enter her hot red head.

I admit to having a great appreciation for the Paul Henry types. We don’t have to agree with everything they say, but the world needs them. I never voted for Bob Jones, but I read all his books. Trevor Mallard is a gas. Even Richard Prebble was vastly underrated. He could have been a great entertainer. Jeremy Clarkson is a buffoon but he says things that are intentionally provocative and they need to be said. It shakes precious people out of their precious and endlessly “appropriate” and boring lives. Since Paul Henry came back to breakfast time, I have started watching TV in the morning again. And I’m sorry, I can’t think of a prominent woman who is provocative AND funny in the New Zealand context, although Christine Rankin comes close.

But Pammy was frothing this morning. Surprise! Why was Pammy frothing? Ostensibly, because John Key has been pulling a young woman’s pony tail. I’m disappointed in John, to be fair. It’s not the wisest of things to do. I’d stop short of Andrew Little’s use of the word “weird”, but he would say that, wouldn’t he? He wants to take JK’s job.

Anyway, Pam was positively trampolining in her chair, flushed with the zeal only bestowed upon people whose political ideology is craving for an outlet. People like Pam are so bewildered about why John Key’s personal popularity continues to hold up National support that they are desperate to bring him down for ANY reason. I wish they could be honest, though. It’s petty politics at its worst to pretend that the gravity of John Key’s poorly judged behaviour rates higher than a 3 out of 10 on the scale of inappropriate behaviour. But I’m a male, so I would be categorised for that comment. Stereotypes are so helpful aren’t they?

Strange thing is that the public seem to prefer John Key’s open and sometimes bumbling, human persona to rabid, frothing, sarcastic, hard faced activists who have all the answers. If Pam had all the answers, she would have got something right in her life by now and I don’t see much evidence of that. But activists are like artists. They suffer for their art.

So do the rest of us.